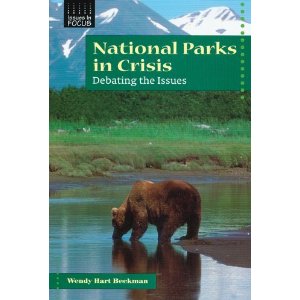 In these days when the world’s wisdom speaks of ‘going green’ to save the planet, few people realize that the United States National Park Service has been doing that since its inception.

According to the wealth of information contained in Wendy Hart Beckman’s book, National Parks in Crisis, ‘going green’ is just one of many ways the National Park Service (NPS) fulfills its mission of preserving “unimpaired the natural and cultural resources and values of the national park system for the enjoyment, education, and inspiration of this and future generations.”

Living up to the promise of its subtitle, “Debating the Issues,” the book presents the facts, opinions, and arguments of all sides on a variety of topics. Beckman has done an excellent job documenting the threats to the park system’s past and ongoing existence, and the National Park Service’s response to those threats.

Sometimes that response changes based on newly acquired knowledge or a change of culture. One example is the elk in Yellowstone National Park. Once considered a nuisance, they were routinely removed, hunted, or fenced out. In more recent years, attempting to return native species to their original setting, elk have been returned to the parks and encouraged to thrive. The NPS has done the same with many plants and other animals as well.

The book is laden with interesting facts, such as the difference between wildland fires (normal occurrence, caused by an act of nature) and wild fires (man-made, usually through carelessness or arson). Smokey Bear (not Smokey ‘The’ Bear) replaced Disney’s famous deer Bambi as the original ‘spokes-animal’ against forest fires, and that the parks’ glacier-covered areas have shrunk by 73 percent from 1850 to 1993 (and scientists predict that all the parks’ glaciers will be gone by 2030).

Written for grades 6 through 9, National Parks in Crisis is also a valuable resource for adults and libraries. Its easy-flowing style and well-placed explanations of scientific terms helps any reader understand the Park Service’s difficult balancing act of helping people enjoy the parks in the present, while making certain the ability of future generations to access the park system’s scenic beauty, recreation, and educational opportunities. The information presented provides a thorough reminder of the critical ecological interdependence between man, native species, and natural resources.

Author of five books, including the acclaimed Artists and Writers of the Harlem Renaissance and Robert Cormier: Banned, Challenged, and Censored, Beckman has again crafted an enjoyable read that will challenge your thinking and entertain you as it informs.

*FTC Disclaimer: this book was provided to the reviewer at no charge.